Posted by SD News Blog at 9:54 am
North Korea says it has been practicing to blow up South Korean seaports and airports with nuclear warheads during its most recent ballistic missile launches on Tuesday, the latest sign of Supreme leader Kim Jong Un's anger over attempts by South Korea and the U.S to contain it's military operations. 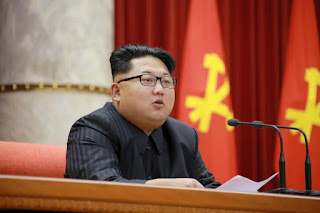 North Korea launched three missiles – two short-range Scuds and one medium-range Rodong – from a launch site south of the capital Pyongyang early on Tuesday morning. They flew about 350 miles across the peninsula to land in the sea off the east coast.South Korean military officials said they had the potential to hit even the southern most parts of their country.


According to the North's state media, their Supreme leader Kim Jong-un personally supervised Tuesday's firing of the three ballistic missiles, a week after South Korea and the United States chose a site in the South to deploy the Terminal High Altitude Area Defence (THAAD) anti-missile system to counter threats from the North.


Military officials from the U.S say the missile test from North Korea is more of a show of strength and force rather than a test to improve missile capabilities.


When South Korea and the U.S chose to deploy the THAAD Military technology in a U.S base in South Korea, China objected to the move saying it would destabilize the security balance in the region before North Korea threatened a "physical response".


The drill carried out on Tuesday rehearsed “making preemptive strikes at ports and airfields in the operational theatre in south Korea, where the US imperialists nuclear war hardware is to be hurled,” the North's official Korean Central News Agency said.

“Kim Jong Un expressed great satisfaction over the successful drill,” the KCNA statement said, and he praised the soldiers for being “fully ready to carry out any order issued all of a sudden.”

Kim Jong-un, the third-generation leader of North Korea bears the official title of “Supreme Commander of the Korean People's Army”.