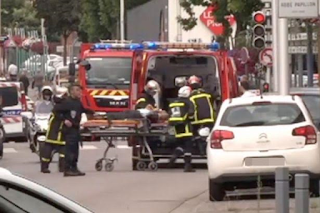 This morning a Catholic priest near Normandy, City of Rouen, France was found dead after two men armed with knives took hostages at a church and slit the priest's throat. Read Here. But new reports coming out of the crime scene say the knife-men shouted 'Daesh' a message in support of Islamic State (ISIS) as they launched the attack. Before police units rushed to the church in the Normandy town of Saint-Etienne-du Rouvray and shot them dead after a long gun battle.

A spokesman for the ministry of the interior, Pierre-Henry Brandet, confirmed that the priest was dead and said another hostage was "between life and death".

Mr Brandet told French TV channel BFMTV: "The two hostage-takers came out of the church armed and it was at that point that they were neutralised by the police."