Posted by SD News Blog at 10:44 am
Sex Pistols guitarist Steve Jones has revealed being abused by his step-father at the age of ten turned him into a sex addict. 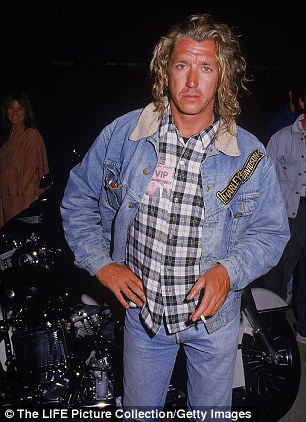 He has opened up on his sexual past, including performing sex acts on another......
man for money shortly after being molested by his mother's partner.

Jones says his murky past turned him into sex addict and that, even at the age of 61, he is unable to hold down a loving relationship.

Ahead of the release of his autobiography entitled Lonely Boy, he has also revealed about engaging in sexual activity with both men and women in his teenage years.

G
In another grim incident, he says as a boy he paid another youngster 50p to perform a sex act on him while they both travelled on a train.

His upbringing turned him into a rocker who craved sex, and he would satisfy his needs at gigs either in cupboards, toilets or in alleyways behind venues, he told the Sunday People.

Jones believes the incidents have left a permanent scar on his attitude towards relationships, and said: 'I never told anyone about it for years and it feels strange putting this in a book even now.

'But knowing the damage... the confusion I felt makes me want to let anyone who's been in a similar situation know they're not alone.'

Talking of the incident with his step-father, he said it immediately left him feeling bewildered and skewed his idea of normality.

'It wasn't the end of the world. I wasn't locked in a dungeon or anything like that,' he told the Sunday People.
'But it did enough to send me spinning.

'Looking back, that's why I've never been able to settle with anyone and why I've ended up a sex addict.'

Almost immediately after the isolated case with his step-father, he came face-to-face with another man who had tried to lure him into an underpass years earlier.

Jones said the man seized his vulnerability and he was given cash to perform a sex act on him.

'It's not like I was ­wearing a badge that said, "I have just been molested",' he said.

'But once it's happened for the first time I guess it's more likely to happen again, because from then on there's a little voice in your head that this is what ­normal is.'

The incident with the other boy occurred on a train to London in one of the closed-off compartments in the carriage.
'I gave him 50p for his trouble,' he said.

Despite the number of sexual encounters he had with men, he never thought he was gay.

Later on in life he said he'd sleep with anyone, and that he had sex with Pretenders singer Chrissie Hyde and all of his band mates' partners, including Sid Vicious' girlfriend Nancy Spungen.

'There was so much shagging going on at this time – at least there was on my part,' he told the Sunday People.
'Any chance I got I'd be trying to get my end away, usually in a ­cupboard or a toilet or an alley round the back of the venue.'