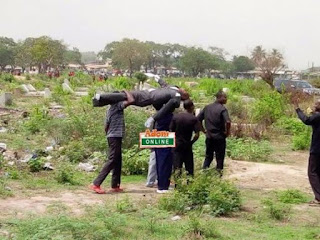 On Saturday, February 11, 2017, there was a commotion at the Tema Community 9 Cemetery, when a Mortuary attendant with Tema General Hospital stormed the burial ground to seize a dead body over an amount of GH¢40 (N3K) balance for the services he rendered.


According to some eyewitnesses, while the body was being interred, the enraged mortuary attendant in the company of a......
colleague, seized the coffin, opened it, picked out the dressed corpse and started heading back to the mortuary.

According to him, the family of the deceased failed to pay the full amount and while he was busily preparing other bodies for burial, they sneaked the corpse out of the mortuary, headed straight to the cemetery to bury and was ready to proceed to perform the funeral.
The funeral later continued following the intervention of some elders and friends of the deceased.  Watch video at the link below: 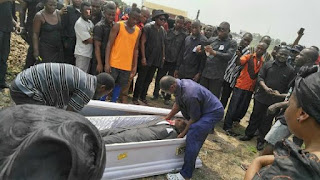