Read In Other Languages 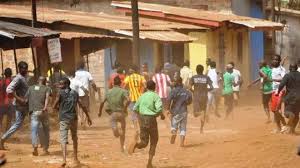 Hoodlums from Ikot Offiong reportedly attacked Oku-Iboku over the weekend and no less than twenty people have lost their lives. The attackers came with machine guns mounted on....
speed boats and killed several innocent citizens while the soldiers in the area ran into the bush for safety.

A native of Oku Iboku, Dr. Demson Ekong, told newsmen ​on Sunday, April 23, ​in Uyo that some of those killed included women and children, Daily Post reports.

Ekong said: “Ikot Offiong people and those Cross River State Government hired to exterminate us came to our area, and killed many fishermen, women and girls who were returning from farms. ​”​We are still recovering the corpses, but as at yesterday​ (Saturday)​, we recovered nine, excluding those killed on Friday.

“They mounted machine guns on their speed boats and shot sporadically at their targets. ”​The soldiers guarding the border between Akwa Ibom and Cross River states, escaped for their lives. ​”​It was after some hours that they called for reinforcement and during the time of military reinforcement, the boys were still firing for over 30 minutes before they finally fled.

“Apart from those killed, they also took away seven persons alive to a fishing settlement near Ibom Le’ Meridien Hotel in Uruan Local Government Area and burnt down the entire settlement.

”​Three of the boys dived into the river and escaped to a village in Uruan community, where they were shown the way back to Oku Iboku.’’‎

Popular posts from this blog

The General Superintendent of Redemption Ministries, Worldwide, Rev. Stephen Akinola is dead. He died in the early hours of Sunday, June 6, 2021 at an hospital in Abuja, BBC pidgin reports. News of Akinola’s passing filtered in just as Nigerians and the world were mourning Prophet TB Joshua of the Synagogue Church of All Nations who died in the wee hours of Sunday. Although it’s unclear what led to his death, reports have it that the clergyman underwent a kidney transplant sometime ago. It was gathered that many worshippers, including members of his congregation and residents, had thronged to the church which has its headquarters in Port Harcourt, Rivers State, to mourn the famous cleric.
Continue reading..

The Ogun state governor, Dapo Abiodun, has suspended his Senior Special Assistant (SSA) on Special Duties, Abidemi Rufai, following his arrest in New York by the Federal Bureau of Investigation (FBI) over his alleged involvement in $350,000 unemployment benefits fraud. The United States Department of Justice on Monday, May 17, announced Rufai's arrest. In a statement released by his Chief Press Secretary, Kunle Somorin, Governor Abiodun said the news of his aide’s involvement in fraud is disturbing. The statement reads: “We received the very disturbing news of the arrest of one of the governor’s political appointees, Mr Abidemi Rufai in New York over alleged unemployment benefits and fraud in the United States, this morning. While the Governor cannot be held responsible for the actions of a full grown adult, especially outside the jurisdiction of Ogun and Nigeria, he has since suspended the suspect from office to enable him answer the charges levelled against him. SIMILAR: IMO STAT
Continue reading..

Many Injured As Explosion Rocks Mile 3 Market In Port Harcourt

Many people have sustained different degrees of injury after an explosion rocked parts of mile 3 market in Port Harcourt City Local Government Area, Rivers State in the early hours of today Monday, May 31. Thankfully, no life was lost in the incident but many people who were running for safety were seriously injured. The spokesman of the Rivers State Police Command, SP. Nnamdi Omoni, said the police were on their way to the scene of the incident to ascertain what transpired.
Continue reading..

The Nigerian Communications Commission has said Nigerians will have to submit the International Mobile Equipment Identity of their phones to it from July. According to NCC, the aim is “to curtail the counterfeit mobile phone market, discourage mobile phone theft, enhance National Security, protect consumer interest, increase revenue generation for the government, reduce the rate of kidnapping, mitigate the use of stolen phones for crime, and facilitate blocking or tracing of stolen mobile phones and other smart devices, one of the means to achieve this is through the deployment of Device Management System.” With this move, the NCC will have the IMEI numbers, NIN, and mobile numbers of every Nigerian.
Continue reading..