Cause of Grenfell Tower Fire In London Revealed 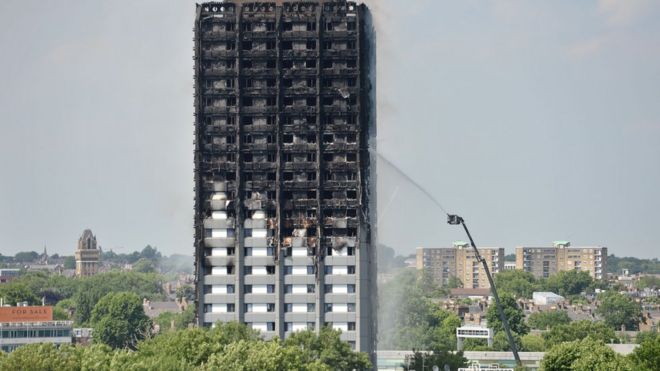 The Grenfell Tower fire in London started in a fridge freezer, and outside cladding and insulation failed safety tests, police say.
The Metropolitan Police says it will consider manslaughter, health and safety and fire safety charges.
Seventy-nine people are feared dead after the blaze destroyed 151 homes in the Kensington tower block and nearby.
The government has ordered immediate testing of the Hotpoint fridge freezer that was involved.
Whirlpool, which owns Hotpoint, said: "We offer our most profound condolences to the victims, those who have lost loved ones, homes, and possessions, and to their friends and families."
Nine of those who died on 14 June have been formally identified so far. Nine people remain in hospital, with three people still in critical care.
Police said the fire had not been started deliberately and the speed with which the fire spread was "unexpected".
Preliminary tests on the samples of insulation showed it burned soon after the test started, and more quickly than the cladding tiles.
However, they both failed the police's safety tests - which are similar to those being carried out by the UK government.
Portsmouth City Council and Islington Council are the latest local authorities to say they are taking precautionary measures over cladding that raises safety concerns.
Meanwhile, the Department for Education said all bodies responsible for safety in schools in England are being instructed to carry out checks to identify any buildings that may require further investigation.