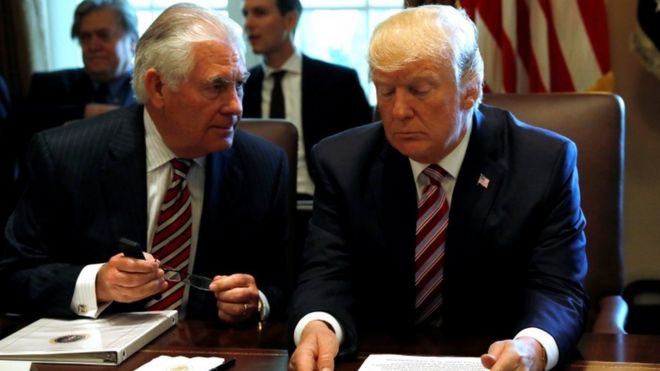 The White House event had been held every year since President Clinton's tenure.
The Eid al-Fitr feast ends Ramadan, a period when Muslims fast and focus on charitable giving.
But US Secretary of State Rex Tillerson reportedly rejected a request to hold a reception.
In May, Reuters said Mr Tillerson had refused a recommendation from the State Department's office of religion and global affairs to organise a celebration.
Mr Trump has previously been criticised for his use of anti-Muslim rhetoric, including on the campaign trail when he called for surveillance of US mosques.

He said in a statement: "On behalf of the American people, Melania and I send our warm greetings to Muslims as they celebrate Eid al-Fitr.
"Muslims in the United States joined those around the world during the holy month of Ramadan to focus on acts of faith and charity. Now, as they commemorate Eid with family and friends, they carry on the tradition of helping neighbours and breaking bread with people from all walks of life.
"During this holiday, we are reminded of the importance of mercy, compassion, and goodwill. With Muslims around the world, the United States renews our commitment to honour these values. Eid Mubarak."


The first presidential Iftar dinner (the name for a meal held after sunset, when Muslims break their fast), is said to have been hosted by Thomas Jefferson in 1805 for a Tunisian envoy.
The subject was covered in a blog post on a US Department of State website, IIP Digital.
The post, titled "Thomas Jefferson's Iftar", appears to have been removed, but is available in archived form here.
The idea of hosting a dinner was revived by Hillary Clinton in 1996, when she was First Lady.


It became an annual tradition from 1999 and was attended by prominent US Muslim leaders, diplomats and legislators.