Read In Other Languages

July 18, 2017
A British man and a local employee have died at an Italian beach after they went to help the tourist's daughter who got into difficulties in rough seas.

Italian reports say the young girl had been playing in the sea with her grandfather at a beach at Ostuni on the south-east coast near Brindisi.
When the pair struggled in the high current, the girl's father and the beach worker rushed to their aid.
They too were overcome by the waves and rescuers struggled to reach them. 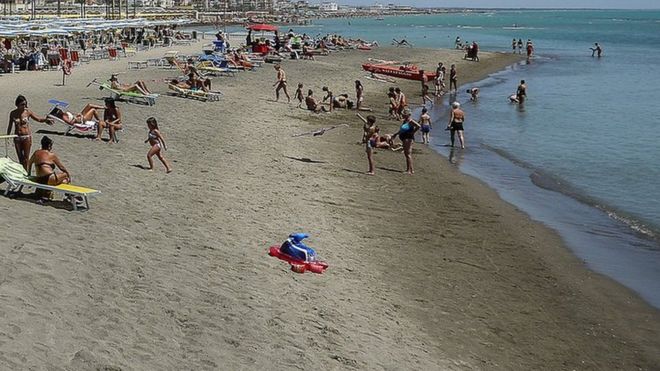 The girl and her grandfather were eventually brought to safety.


The British tourist, aged 48, has not yet been identified but the local worker has been named as Martino Maggi, 51.

The drama unfolded at about 10:00 (08:00 GMT) on Thursday, at Bosco Verde beach.
Winds in the area were gusting at between 10 and 15 knots, reports say.
Officials say the sea there is notorious for the high north-easterly wind (Mistral) and local reports suggest the two men who died were unable to get back to the shore because of the strong current.
"That stretch of coastline unfortunately isn't new to this kind of tragedy," Giuseppe Chiarelli of Brindisi port authority told Rai TV.

Popular posts from this blog

Fast rising Nollywood actress, Onyii Alex  got tongues wagging after she posted a supposed 'raunchy' photo in Instagram on Sunday.  The picture showed the outline of her camel toe as it was a clingy Gucci Kaftan. She was first called out by her actor colleague, Zubby Michael. See more of the photos below with screenshots of some comments:
MORE NEWS...

"Another Catastrophe Is Set To Begin In December 2020" - Abhigya Anand, Who Predicted Corona Virus Before It's Spread

Abhigya Anand is an Indian who is just 14 years old. He is an astrologer and within August 2019, he amazed everyone in a video in which he predicted the coronavirus pandemic that months later impacted the world. Anand launched a new prediction a few hours ago in which he made known when the pandemic will finish and also warned of a new tragedy that will start to take place in December this year and that will break out in March 2021. He is the youngest student who completed his studies of Vastu Shastra, an old doctrine of Hindu culture that analyzes how nature impacts the constructions of humanity. In addition, he has a postgraduate degree in Ayurvedic Microbiology. BREAKING NEWS:  NIGERIA BELONGS TO FULANI & WE ARE READY TO TAKE OVER Abhigya said in his new video that September 5 of this year will be the date on which the Covid-19 will be completely eradicated. And he remarked that it is simply possible to flee from “these pandemic outbreaks” if “immunity” is acquired. On the other
MORE NEWS...