Eight people - including seven children - have died in a stampede ahead of a football match in Malawi, police say.

Dozens more were injured in the crush at Lilongwe's Bingu national stadium. 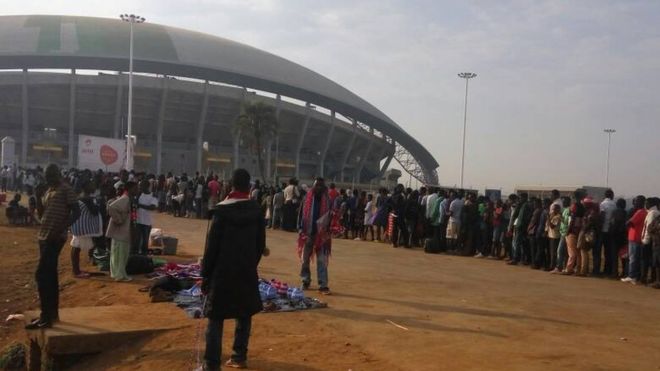 The stampede happened as thousands of people rushed for seats ahead of a friendly between top sides Nyasa Big Bullets and Silver Strikers.
Despite the deaths, the match did go ahead in a packed stadium, although President Peter Mutharika did not attend as planned.


He offered his condolences and said the government would do all it could to assist the families of the bereaved.
He said he was shocked to learn of the tragedy.

The BBC's Frank Kandu in Malawi said gates at the 40,000-capacity stadium were supposed to open at 06:30 local time (04:30GMT) to allow free entry of people - but there was a delay of about three hours.


However, thousands had already turned up, and some tried to force their way in, prompting the police to fire tear gas.
Inspector General of Police Lexan Kachama told Reuters news agency he expected the number of casualties to rise.
The football match was being held as part of events to mark the 53rd anniversary of Malawi's independence from British colonial rule.
When the match did go ahead, Nyasa Big Bullets won 2-1.
Watch this video of howw a lecturer tried to sleep with 3 students at a time