Join The #MWISwapped Competition Today On Instagram.| My Wife & I 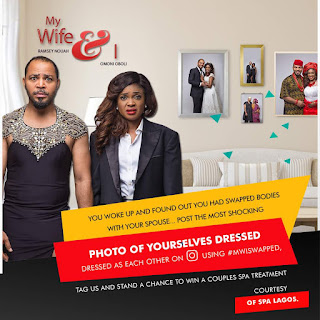 It’s been an exciting week for movie lovers in Nigeria. One of the most anticipated Nollywood movies this year, “My wife and I” is set to drop this Friday, August 25th in cinemas nationwide. The movie which boasts of Nollywood heavyweights like Ramsey Nouah, Omoni Oboli, Ngozi Nwosu, Rachael Oniga, Seyi law, Sambasa Nzeribe, Dorcas Shola fapson and a host of other amazing actors has garnered a lot of attention on social media due to the unique nature of its plot and the caliber of the actors involved in it.
It is being looked upon as the next big movie to that will come out of Nollywood in the footsteps of The Wedding Party. The expectations are further strengthened by the partnership between Inkblot productions and FilmOne distribution. 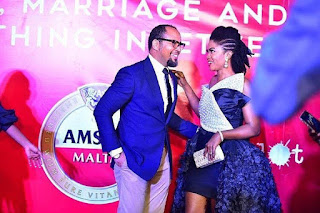 Directed by Bunmi Ajakaiye, “My wife and I” is a story about Toyosi (Ramsey Nouah) and Ebere (Omoni Oboli), an un-happily married couple on the brink of divorce and both convinced that the other is the reason for the disintegration of their marriage, but for the sake of their twin teenagers and at the urging of their parents, they decide to give their marriage one last chance.
Watch the trailer below:

The premiere held recently on the 13th of August at the Filmhouse IMAX cinema in Lekki was a glamorous affair with the movie stars Ramsey Nouah and Omoni Oboli all present alongside other Nollywood stars like Omotola jalade-Ekeinde, Mimi Onolaja, Moyo Lawal, Ini Dima-Okojie and Toyin Abraham, amongst many others.
The movie reviews by people present were all very positive with most people scoring the movie a coveted 10/10.