This wedding dress breaking the internet at the moment 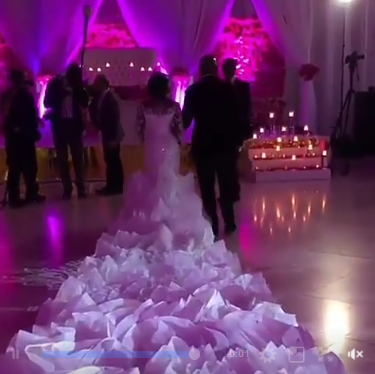 Ex-president Atiku Abubakar's son has tested positive to Corona Virus and has been moved to a hospital in Gwagwalada for treatment.
The Vice President shared the disheartening news via his Twitter handle.
See tweet below:

Barely 24 hours after he was deposed as the Emir and banished from Kano, Governor Nasir El-Rufa’i of Kaduna State, has appointed Malam Muhammad Sanusi II into the board of the Kaduna Investment Promotion Agency (KADIPA).


A statement from Sir Kashim Ibrahim House said that, “the appointment is part of the reconstitution of the board of KADIPA, which is statutorily chaired by the Deputy Governor, and has as internal members other senior officials of the Kaduna State Government.”


The statement signed by the Special Adviser on Media and Communication to the Governor, Mr Muyiwa Adekeye, said that “Kaduna State hopes to benefit from the profile, experience, intellect and networks of His Highness, Muhammad Sanusi, who before becoming Emir, had built a solid reputation in global financial circles.


According to the statement, “Malam Nasir El-Rufai said that Kaduna State is honoured to be able to call on the services of a man of such calibre to drive its development,’’ the statement added.

The National Youth Service Corps (NYSC) has suspended the ongoing Orientation Course for 2020 Batch A, Stream 1 corps members due to the current coronavirus situation in Nigeria.


This is coming barely 24 hours after the third coronavirus case was confirmed in Nigeria.


In the shared statement via the official Facebook page of the NYSC, it states that “Corps Members shall be posted to commence their primary assignments forthwith, while they shall be invited back to the Orientation Camps when the situation improves just like it happened a few years ago when the nation was confronted by the Ebola virus threat”.

And so far, “no Corps Member or Camp Official has contracted the virus since its outbreak”.

Read the full statement below:


ALSO SEE: THE NORTH IS ABOUT TO BE DESTROYED - EX EMIR, SANUSI

Mr. Ikazoboh, who on behalf of Dangote, commiserated with Governor Sanwo-Olu over the unfortunate incident caused by the gas explosion, said the Dangote Cement company “would be supporting the reconstruction of the Abule-Ado area with N100 million worth of cement”.

Nosa Aigbogun, a member of the Living Faith Church (a.k.a Winners Chapel), Uwasota branch in Benin, Edo state, has cried out from his hospital bed, after allegedly being assaulted by Pastor Gideon Oyedepo, who he said is the resident pastor and younger brother of the G.O, Bishop David Oyedepo.

DailyPost reports that the Pastor Gideon Oyedepo was accused of constantly harassing and assaulting members of his branch, slapping them at will.

Aigbogun, who is recuperating at a medical facility in Benin, said he was the latest to be slapped by the Pastor.

He said since he was transferred to their branch as resident pastor, the younger Oyedepo has enthroned himself as emperor and has become a problem to members of the church.

He appealed to the founder of the church, Bishop Oyedepo, to rescue them from further beatings from his younger brother.

“I want concerned authorities to rescue us from him, we have received enough slaps. We are begging his elder brother, Bishop David Oyedepo, to save us from…

Bill Gates Steps Down From Microsoft To Focus On Philanthropy

Bill Gates is stepping down from the boards of Microsoft and Berkshire Hathaway to devote more time to philanthropy, he announced Friday.

Gates, who started Microsoft in 1975 with Paul Allen, said he is stepping down in order "to dedicate more time to philanthropic priorities including global health and development, education, and my increasing engagement in tackling climate change."
___________________________ SEE: SKINNY GIRL IN TRANSIT SEASON 6 FULL EPISODE

The Central Bank of Nigeria has collapsed the multiple exchange rate policy that determined the value of the naira and adopted a single exchange rate.

The country will now have a uniform rate for the official rate, bureau de change operators, importers and exporters amongst others.

This was contained in a circular signed by the Direct, trade, and exchange department of the CBN, Ozoemena Nnaji, on the disbursement of the proceeds of the International Money Transfer Operator (IMTO).

According to the apex bank, IMTSOs to banks will be at N376 per dollar, banks to CBN N377 per dollar, CBN to Bureau de change operators N378 per dollar, BDCs to end-users should not be more than N380 per dollar and the volume of sales for each market is $20 thousand per BDC.

Although this move has been seen as technically devaluing the naira the apex bank last week said in a release that “market fundamentals do not support Naira devaluation at this time.”

The naira has been under pressure after oil prices fell $3…

Many Feared Dead, Church Burnt As Explosive Device Goes Off In Akure

Explosive Devices suspected to be bomb that are being transported to the northern part of the country have exploded along Akure-Owo highway in Ondo state.

The blast that caused apprehension among most residents of Akure, Obaile, Eleyowo, Iluabo, Osi and environs in Ondo state, destroyed a popular church beside road, “Possibility Church”, where some people were said to have been feared killed.

The incident happened in less than one kilometer to Akure Airport.


Confirming the incident, one of the officials of the Akure Airport who preferred to speak with SUNSHINETRUTH anonymously, said “those people who are moving the bomb to the north, are still being buried on ground with their security vehicle at the scene while those at the Mission home of that church have been rushed to the federal medical centre, Owo.

“Some people are on danger list now, while some have gone (feared dead); the sound (of the blast) woke everybody around 1:00am today. God should just have mercy o.”